Our proposal is based on four interconnected elements: the facade, the mixed-use space, the administration space and the courtyard-garden.
The facade directs the architects’ association activity towards the nearest public realm and gives support to cultural and professional activities. Because of the social image of the association, we think that the facade has to be used as an experimental element for new sustainable and inexpensive construction solutions, that gathers the collective concerns and interests up, offers support for intellectual and cultural activities and works as a form of advertisement in the public realm. It should be a support for professional expressions and be opened to public.
There, the duality open-closed is supported by the sliding walls. The upper part of the façade is a double polycarbonate skin that projects lights and images outdoors -for example, for advertising or as a part of an artistic activity-. The lower part, instead, is built with a double skin composed by an external face of panels made in laminated wood and other internal one in glass. When the external panels are folded, the glass makes visual continuity possible from the outdoor public realm to the professional association indoors.
The facade also works as a solar collector. In winter, the sun heats the air inside the polycarbonate double-skin when passing through it, creating a greenhouse effect. The hot air, which minimizes the heat loss through the building envelope, can be also used to warm different rooms by conduction through the plenum space in the false ceiling. The floor can also be heated by the sun rays when they cross the external facade and interchanges heat with the inner air, due to its thermal inertia -it is made of concrete and epoxy resin-. In summer, the sun rays are higher and more vertical: they are stopped by the cantilevered upper flats over the main facade, so they can’t get in through the polycarbonate skin, avoiding heat transfers to the inner space.
The mixed-use space is the architects’ association public space. It’s placed next to the library-corridor and divided into four rooms, only delimited by sliding panels which act as internal walls for growing and diminishing the inner space according to the specific requirements of the uses. The mixed-use space is also limited laterally by a sequence of distributed longitudinal walls for accessing to the different rooms. These walls are bookshelves, covered by a polycarbonate sheet over its both faces to lead a hazy light breaking through from each room to the corridor and vice versa. Perpendicular to these walls and upon the sliding panels some other polycarbonate sheets are placed to bring sunlight into each room.
The administration space is the private space. It takes all the administrative functions of the architectural association -archive, management, offices, store and toilet-.
The courtyard-garden is the area for relaxing, a little space outdoors where plants can grow. However, we need to demolish part of the floor structure above -because of an existing metal hoop inside- to open a bigger courtyard where architectural activities can take place and also get a better lighting and ventilation to the nearest rooms. The courtyard makes thermal comfort possible in summer: the air will be always colder inside than at the external facade because the sun never lights the courtyard directly. This cold air will be moved inside the building for air-conditioning through the plenum or by cross ventilation. 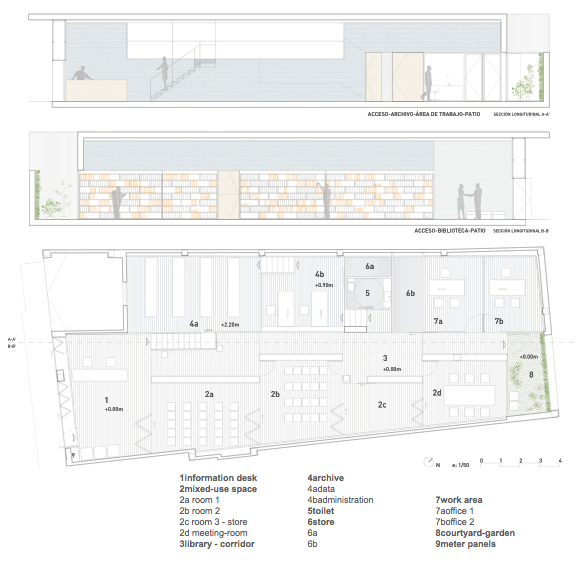