In 1950 Spain, which had been mainly a rural country until then, started an accelerated process to turn into an industrialised urban society. This process, known as el desarrollismo (the spanish development), was generalised in the biggest urban areas and cities through the industrialisation and the construction of new urban infrastructures. In other words, it transformed the economic relations and the power balance between the city and its agricultural belt. The desarrollismo caused a huge migratory flow which drew thousands of people from the rural areas to the cities, where they expected to find a better life and higher incomes at the factories. Cities like Bilbao experienced an urban growth which doubled -or even tripled- the population of some neighbourhoods. Owing to that, housing became a critical problem in the biggest cities and thousands of brick blocks of flats were built -only in Bilbao, it is thought that there were more than 15000 people living in shanty towns, most of them in Uribarri. The new blocks failed to offer their tenants some elemental features, such as enough natural light, green areas or public meeting areas.
The topography and the slopes of mount Artxanda dominates the neighbourhood and its surroundings, and determines the layouts of housing, urban fabric, train lines and road infrastructures. Roads and railways are drawn unrestrained crossing over the slopes -or what’s more, over the neighbourhood-, while the pedestrian areas remains fragmented and unconnected from its own. Neighbours, who most of them are elderly people living there since the first blocks were built in 1950, have not easy access to these uncomfortable areas. Because of that, we have focused our objectives on regaining the social value of the public realm in Uribarri, reconnecting these areas with their neighbourhood, the city and its agricultural belt. Therefore, we use urban quality objectives in three related scales: territory, city and neighbourhood. 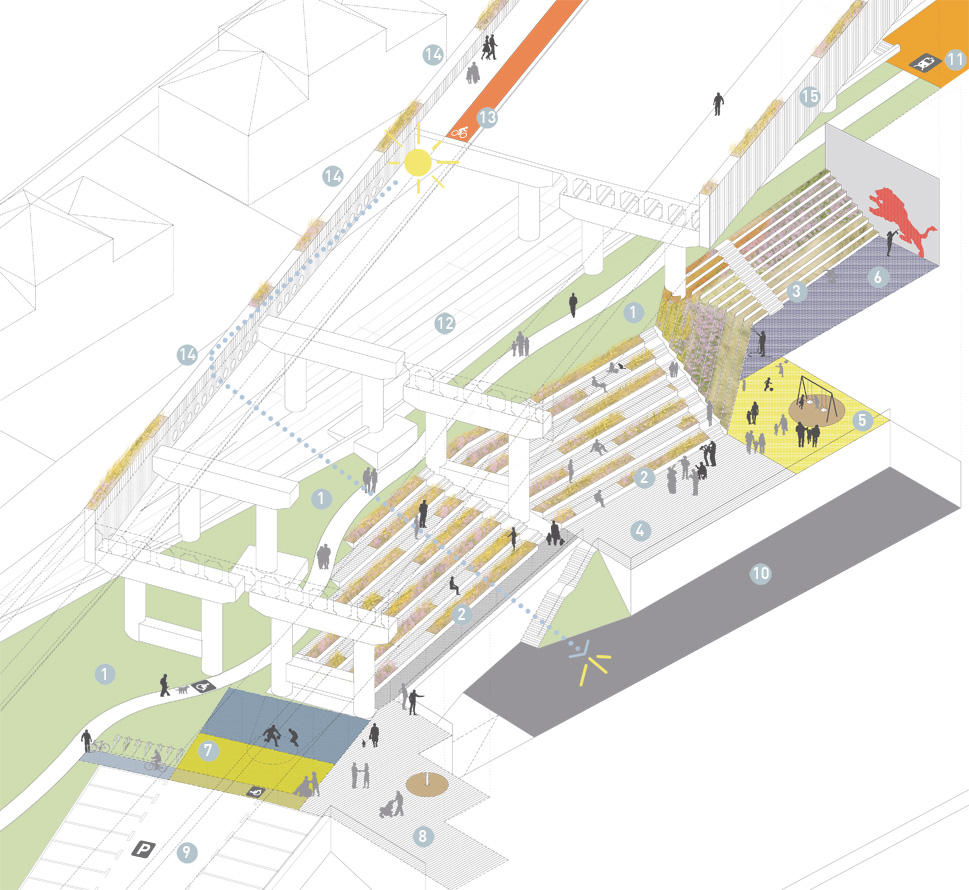 Uses and activities
1- green area / ecological corridor
2- stands, flower beds and vegetable gardens
3- flower beds
4- stage
5- children’s playground
6- youth art creation area
7- sport courts
8- small square and fountain
9- existent car park
10- housing court
11- Loruri-Ciudad Jardín train station
12- Txorierri railway
13- cycle path
14- sun tunnels
15- parapet-bench-flower bed-sun tunnels
Urban quality objectives
In a territorial scale we propose:
– creating a big green area and an ecological corridor from Uribarri to Artxanda’s slopes for reconnecting the fragmented urban areas situated along the Txorierri railway.
– blending Uribarri’s new green area with the pedestrian and cycle paths running from Bilbao to the nearby towns around Bilbao’s valley.
In a city scale we seek:
– to include the residual space under Maurice Ravel avenue into the urban fabric and the green areas of Matiko and Ciudad Jardín as a new public area.
– to prioritise a smarter, sustainable and accessible urban mobility based on pedestrian and cycle paths between Matiko and Loruri train station.
In a neighbourhood scale we want:
– to improve Uribarri’s urban scenery by recovering the spoiled and unused plots situated under the viaduct of Maurice Ravel avenue, along the Txorierri railway. This area is an unstable slope of gravel and scattered rocks which covers from the railways to the warehouses and basements delimited by the housing blocks. We propose to restore the slope and stabilize its upper layer of soil with reclaimed wooden boxes filled up with gravel and topsoil in which flowers and vegetables could be planted. When arranged as stands, these boxes define a meeting public area whose steps are chests where the gardening tools of the vegetable gardens can be kept. On top of the warehouses we propose new public squares and stages.
– to bring daylight in. Because the sunlight can make a public area nicer, warmer and safer, we propose to collect the sunbeams through a new parapet with solar tunnels inside. The parapet is also at once boundary, flower bed and bench, and it is wrapped in wood to reduce the visual impact of the viaduct. The space below, painted in bright white, will increase its brightness when receiving this reflected light.
– to transform this space into an accessible urban park which can be freely enjoyed by all the neighbours, regardless their physical condition or age. The new urban elements and features will activate social uses and public activities which will strengthen the community character of the neighbourhood.

Materialisation
– The social use requires certain elements which will help people meet and interact: places where talking, relaxing, growing flowers or vegetables, playing, creating or expressing themselves. We use the most versatile elements, so that citizens can build their own and personal community space: benches, flower beds, vegetable gardens, meeting areas, a small square with a fountain, sport courts, stages, children’s playgrounds and artistic areas for young creators.
– The vegetation is also important in this new urban space as a key to improve its environmental quality: we have chosen ornamental plants and vegetables which can grow in shaded areas like ferns, heathers, climbers and green leafy vegetables (such as chard, celery, cabbage, sprout, cauliflower, spinach, lettuce, turnip, leek or radish).
– As we propose to merge the new community space with a wider urban area, we need to connect it with the ecological corridor of mount Artxanda by defining a soft paving with seeded areas, wooden terraces, recycled rubber for the playgrounds and compacted sand and gravel for the paths.
– Since the project area is placed below the viaduct, north-facing and very close to the high blocks of flats of Uribarri, it remains shady most part of the time. Bringing in sunlight is thus essential for the improvement of the environmental and urban quality of the area, so it is collected by highly reflective solar tunnels from the upper side of the viaduct. Additionally, the area below is painted in bright white to ensure an uniform lighting distribution.