The old train station of Alguazas is part of an industrial landscape not esteemed by our society that sometimes, however, provides us with singular buildings of an exemplary and restrained charm. The old goods shed, located at the platform on the north side of the train station, is a structure of high plastic values surrounded by other buildings that have already been restored to house new activities and uses, such as a police station -the old train station- and a hostel -another old goods shed-. Thus, it is aimed to turn the station plots into public spaces for enjoyment. Our idea starts with the development of different actions of public realm restoration on the platform of the train station. If we are able to create attractive spaces around the old goods shed, like a small public garden, hidden synergies should appear between those spaces and the new library and youth space. What’s more, this garden is planned to work not only as a barrier against noise pollution but as a viewpoint area over the railway line where people can lie down for reading and resting.
Our proposal keeps the external volume of the shed as an identity element and part of the collective memory of the neighbourhood, through two main ideas: the first one determines the layout of the inner space of the shed by recovering, checking and updating the structural elements to host the new uses of library and youth space in the existing building. In other words, our idea fits the project requirements inside the volume defined by the metallic structure, so as to be seen as a respectful intervention. Thus, the trusses are restored to keep their high aesthetic values visible indoors. The two cantilevered eaves of the pitched roof were useful for the transport and storage of goods, but today they are not necessary for the new activities that will be housed. Even so, these cantilevered eaves are restored and wrapped by the new external skin to give a clear image of the shed. 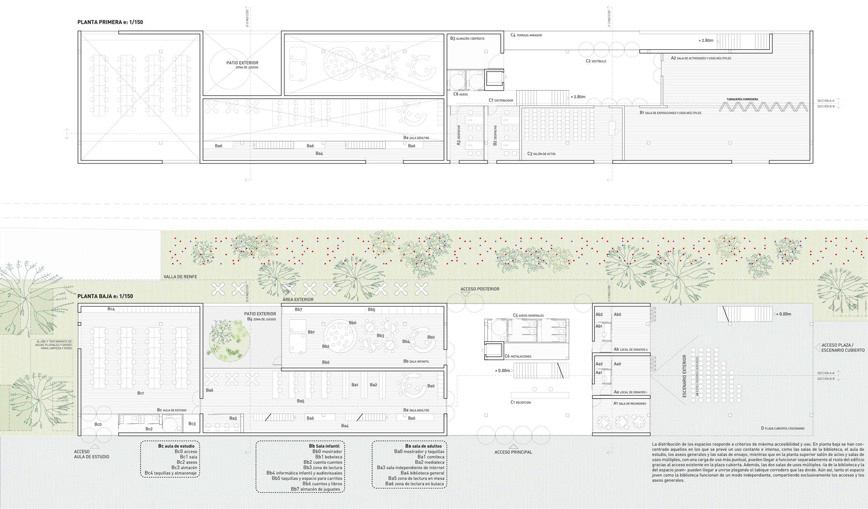 The second idea defines the envelope features. The external image of the library and youth space keeps the industrial language inherited from the old goods shed. Two decisions were taken to fix the final shape of the building: first, to cover the existing structure with a skin that accomplishes with all the acoustic and thermal insulation requirements of the building program. Second, to keep the original volume and shape of the building. In practice, that means a development of the program of uses on two floors, on the north side.
Different window openings are opened in the skin to introduce sunlight into the inner spaces of the building. Thus, the rhythm of windows and doors on facade accords with the location of uses and rooms inside the building; adult’s and children’s library zones, owing to their arrangement on a single floor, are lit by indirect zenithal sunlight and through the courtyard, while the other rooms are lit laterally. The only exception is the classroom that mixes both systems.
On the north side, the facade is interrupted on the ground floor to create a small covered public square where holding concerts if the facade of the rehearsal rooms is completely open. To the west, the facade opens on the upper floor to delimit a balcony from where it is possible to look at the passing of the trains or the surrounding landscape. Moreover, a small courtyard next to the facade is built for the children to play safe. The facade is also a support for other external activities: it can be a stage for plays, for showing films, etc.
As a result, the facade is drawn as a restrained, opaque and dense skin, with an external slightly mirrored finish for reflecting the surrounding landscape of vegetation, buildings and trains while capturing fresh and light colours. It extends the visual limits of the building, merging it with the vegetation, the topography or the city. It is like a shadow or a patina that enriches the visual perception of the whole group of buildings, and values the landscape around the shed. 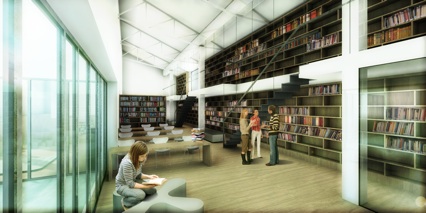 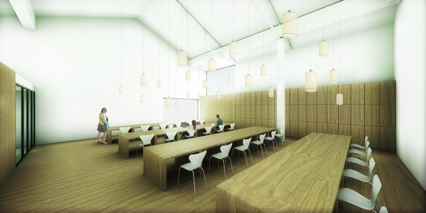