How much space is under-used in our cities? The importance of cars in our neighbourhoods is very often caused by some conventional zoning rules. Sometimes, we think that traffic is a priority, but we forget that the city is first for the people: when we use most of it for getting a fluid circulation of cars and a big number of parking spaces on the streets, we lose space for green areas, squares or pavements, which are the places where people meet, play or talk, where life is celebrated. When we promote a private use of the city instead of a public and civic one, we transform the city in a less democratic place in which the pedestrian areas often seem fractured, inhospitable and even not safe enough.
Deusto is an inner city district of Bilbao placed beside the right bank of the Nervión. It is found at the foot of the southern slope of Mount Artxanda. Because of the several faculties, buildings and schools owned in Deusto by the University of Basque Country and, more particularly, by the University of Deusto, the character of this city district is mostly residential with a throbbing student life. Deusto is divided into four neighbourhoods: Arangoiti, Ibarrecolanda, San Ignacio-Elorrieta and San Pedro de Deusto-La Ribera. Lehendakari Aguirre is the main street of Deusto: it goes from west to east with a very wide street section which supports high traffic flows. As a result of this, its public realm is often aggressive, uncomfortable and not very attractive for the pedestrians. 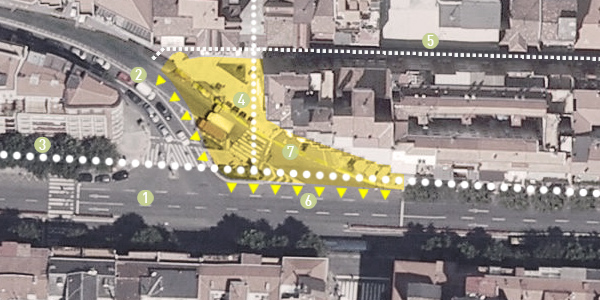 Planning strategies
1- Lehendakari Aguirre avenue
2- Enekuri avenue
3- pedestrian and bicycle path
4- pedestrian access to Arangoiti
5- Luzarra shared street
6- public realm widening and
urban traffic reorganisation
7- new square: red square
Outline of the project site
The project site is a pedestrian crossing at the intersection between Lehendakari Aguirre and Enekuri avenue, which is composed by two zebra crossings and one small refuge island with bushes and traffic signs. Next to the crossing there is a small square hidden behind parking spaces and trash bins. There are not trees, benches, meeting areas or playgrounds in the square, neither in the urban areas nearby, so this place is quite inhospitable. The space for cars is however much wider.
Urban space quality objectives
To recover and promote a civic public use in this urban area, we set up a group of quality objectives for the refurbishment of the area from a neighbourhood scale. The quality objectives are strategies in relation to the urban space: they point out the character and values of this area, correct the urban impacts noticed and, in short, draw a global image according to the citizens’ aspirations for this area.
In a neighbourhood scale, we propose:
– improving the urban scenery by recovering the under-used and fractured public realm between Lehendakari Aguirre and Enekuri.
– expanding the pedestrian area upon the area for cars: if the traffic is gathered in one single two-way street we could remove the double zebra crossing and get the small square widened.
– building an open and accessible urban square which can be enjoyed by the neighbours regardless of their age or physical condition. If we put some benches, fountains, playgrounds and, in short, urban furniture into the square we could transform it in a place where people could meet, talk, rest or play.
– creating new green areas and keep the existing line of trees along Lehendakari Aguirre avenue: the vegetation helps us to be protected from the noise of traffic and improves the environmental quality of the urban scenery. As a result, it makes the public realm more attractive and charming.
– giving priority to sustainable mobility: Deusto is a residential -and relatively close to the centre of Bilbao- neighbourhood which houses a great number of students. Therefore, we think that developing new paths and cycle lanes on Lehendakari Aguirre avenue will strengthen the pedestrian mobility towards the right bank of the Nervión and other nearby city areas.
– developing new traffic calming devices which give priority to the citizens: we propose to transform the crossing at Lehendakari Aguirre into a raised single zebra crossing clearly identified with a rough pavement in cobblestones to reduce traffic speed. 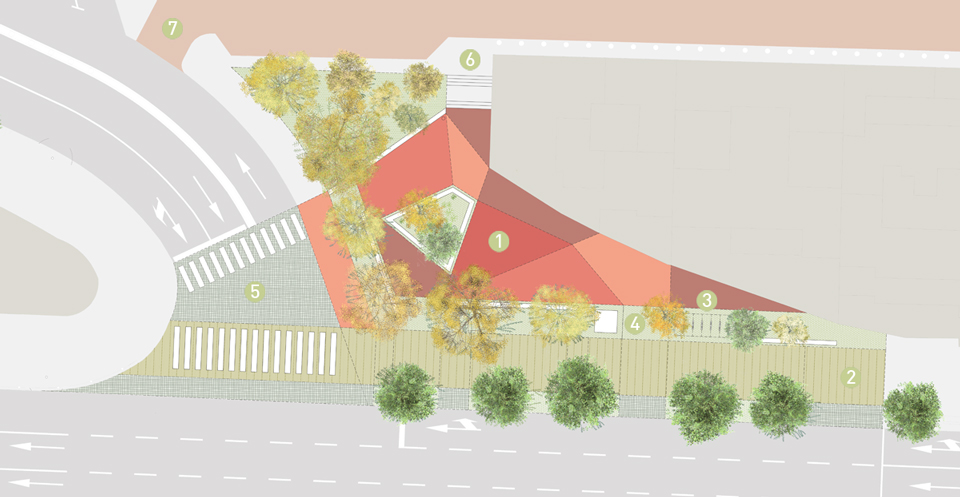 Planning and project proposal
The new red square (1) is built on the reclaimed urban area at the crossing between Lehendekari Aguirre and Enekuri as a new public realm where the citizens play the leading role. Protected from the traffic by trees and plants, the red square houses different uses and levels of privacy around a small green area with trees, delimited by a polygonal central bench. Along Lehendakari Aguirre and Enekuri, another green area (4) -with trees, plants and flowers- shares room with four longitudinal benches, a kiosk, a bicycle parking space (3) and a small fountain. This green area also gives pedestrian access inside the square through the gaps between the four benches.
The removal of the double zebra crossing brings the urban continuity back along Lehendakari Aguirre avenue and gives the opportunity to create a new pedestrian and cyclist lane (2) which will enhance the neighbours’ mobility and give easier access to Arangoiti (6) and San Pedro square through Luzarra shared street (7): and so, the new rough pavement of cobblestones on the crossing (5) is clearly a strategy of calming traffic which gives priority to pedestrians and cyclists over cars. As a result, the public places on both sides of Lehendakari Aguirre will be turned into safer, handier, more agreeable and more accessible civic spaces for all citizens.
Materialization
The public use needs social interaction: the more different social activities the public realm holds, the more attractive and valuable it is. Daily activities such as talking, playing, meeting or relaxing favour the social cohesion and the development of a collective identity in the neighbourhood. A bench can help people meet: if we put a bench facing another one, or if we make it longer, we could help bring spontaneous and natural talks on. Situated in the green areas under the trees to be shaded in summer, the benches draw the boundaries of the square and point out its central position while defining inner areas with different levels of privacy but protected from traffic and noise.
The vegetation is an important element to favour the inhabitants’ daily life and to enrich the quality of the new urban space. Thus, we define two parallel strips of topsoil and grass pavement along Lehendakari Aguirre avenue to be covered by trees, flowers and bushes without any apparent order: the inner strip has aromatic and grass plants like salvia microphylla, aloysia triphylla, stipa tennuissima, allium spp, festuca glauca growing freely between the deciduous trees –fraxinus excelsior, alnus glutinosa, prunus domestica, liquidambar styraciflua– which shade the square in summer. The outer strip, instead, is a flower bed with trees and grass plants which continues the existing line of platanus x hispanica trees of Lehendakari Aguirre. At the north end of the square and next to Enekuri avenue, we place a low mound of grass plants -like stipa tennuissima, vinca minor, foeniculum vulgare– and deciduous trees –platanus x hispanica, betula alba, acer x fremanii, hibiscus syriacus-, whose shapes and colours will change with the seasons.
The red square is paved with soft and durable materials following a pattern of triangles and trapeziums which may remind us a mosaic or a kaleidoscope in different tones of red -Bilbao’s colour-: we use recycled rubber in the playgrounds, grass pavements, gravel and sand of different sizes and a layer of tinted concrete. Lehendakari Aguirre’s pavement is made of brown-tinted concrete slabs instead. The different width of each slab plays again with the idea of mosaic, but in a more subtle way. The crossing between Lehendakari Aguirre and Enekuri is covered with a rough pavement of granite cobblestones.