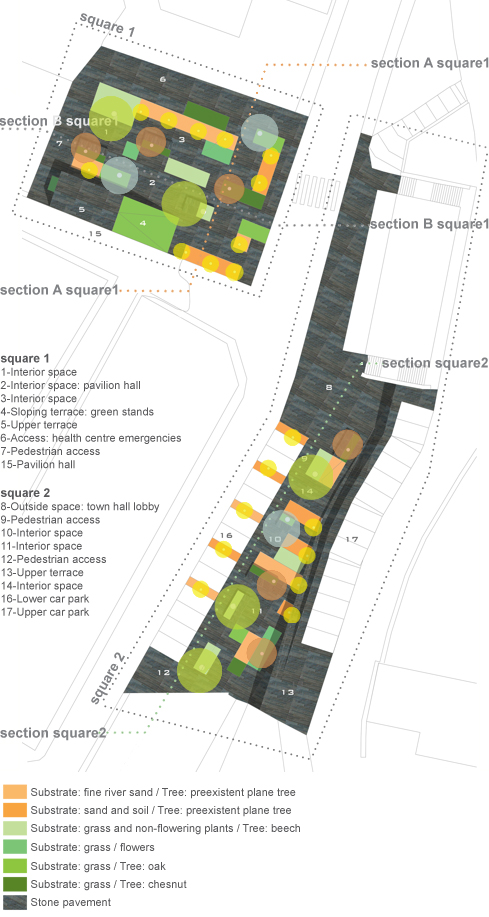 Our idea for the renovation of the Jacobo Roldán Losada square and its environment is based on the understanding of both elements as part of a bigger urban fabric, which includes a church, the town hall, a police headquarters, and the Miera tower. We seek to flourish the existent synergies among those elements for providing citizens with new public realm. Therefore, two new interconnected urban spaces are defined: Square 1 -the actual Jacobo Roldán Losada square- and Square 2 -the urban space next to the town hall.
The layout of elements in Square 1 strictly fortifies the relationship between the inner spaces and the outer elements of the urban landscape which circles the area, and steps it up by creating new public meeting areas inside. In other words, Square 1 can be seen as a succession of empty and full spaces which holds the necessary conditions to stimulate different levels of social behaviour between the neighbours.
What’s more, both the pavement and the vegetation are actually picked out to blend the project into the urban landscape according to the existent urban and social conditions. Although the square is actually seen from the terraces and the balconies of the buildings around, privacy in the inner spaces is assured by using a varied vegetation of trees and bushes, of different sizes, which visually join the new square to the landscape. Pedestrian areas are found at the perimeter of the area and help joining the square with the urban fabric.
In terms of flexibility of use, the inner spaces in the Square 1 can be easily adapted to the neighbours’ wills and needs. They could become playground for children, lecture or reading areas, street market… Because of that, the square appears as an open area without a main axis or a defined centre, whose components do not fit patterns or hierarchies but are ranged around a new small pavilion for art exhibitions, meetings or concerts. Its sloped roof can be used as complementary stands for other public outdoor activities and spectacles.
The trees are key elements since they can control the intensity of use in the inner spaces. We think that growing native vegetation, such as beeches, chestnuts and oak trees, while keeping the existent plane trees on its current place, strengthens the character of the space and ties this proposal up to the citizens’ collective memory.
On the other hand, the esplanade –Square 2– is linked to the town hall. After removing the road between La Torre and Ruiz de Alda streets, the esplanade is transformed into an outdoor lobby and an expansion area for the town hall. This lobby will improve the social understanding of the town hall itself. Accordingly, it is shown as a central walk isolated and protected from the traffic thanks to the existing plane trees, and whose design and intern structure are linked directly and in an intellectual and sensorial way to the Jacobo Roldán Losada square.
To keep the continuity of the pedestrian flows and join the esplanade with the urban fabric as well, we have arranged the car parks along the main street. Thus, by widening La Torre street we can comply with the accessibility requirements and also create an upper car park area behind the town hall.
To fit both squares into the urban fabric is necessary to break up with their isolation. Jacobo Roldán Losada square is extended alongside the façades of both the police headquarters and the healthcare centre by removing the road around the square. However an emergency access for ambulances and fire brigades to the healthcare centre is kept. It is built in the same pavement materials of the square. Therefore, the police headquarters and the healthcare centre get enough previous space, like an outdoor lobby, and the square is thus incorporated into a continuous pedestrian urban space where public uses are easier. 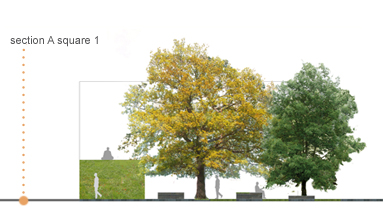