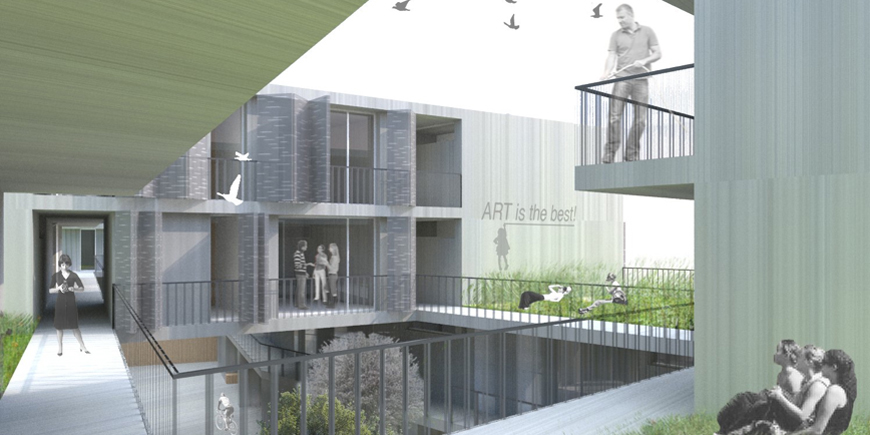 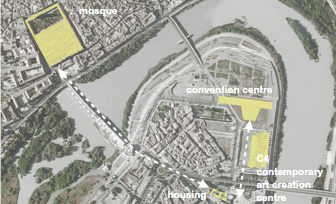 The house of artists is placed on a privileged plot at Miraflores, a meander of Guadalquivir river close to the historic centre of Córdoba. Along the Córdoba’s riverside many interesting urban elements can be found, such as the old Mosque or the new C4 building. Therefore, we think we could build our project from the existing synergies between these elements and the meander, so as to develop a permeable project which can integrate each one of them into the urban and natural landscape. Thus, the apartments must not only be understood as an isolated new neighbourhood, but as an active part of the city where new artistic activities are intimately linked to their inhabitants’ urban needs. The new apartments –inhabited by artists of the C4 building- will facilitate a social and cultural approach to the artistic program of the C4 and the artists’ works, while setting up a contemporary urban relationship between the new building and the artistic heritage of the city. 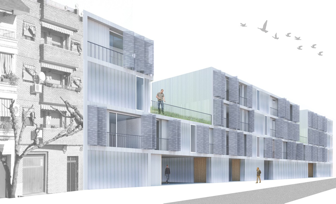 The building is well adapted to the physical and climatic conditions of Córdoba. The zigzag shape of the façade provides the apartments with a big number of sunlight hours and it is permeable enough to the dominant SW winds which refresh the building during the hours of a highest solar radiation. The apartments have two facades: one looking to the public space -which becomes the artists’ public urban image- and the other one to the inner corridors of the building, as a private street which connects the community areas -such as laundry, junk room, workrooms, galleries, garden, etc.- to the apartments. The external facade is protected by foldable sun panels, which are drilled as if they were a traditional latticework to filter the sunlight and to control the sun exposure and refresh the apartments. The internal facade is composed by a foldable double skin of polycarbonate and glass layers. The space between them can be used as a mixed-use space: it works as a lumber room when both layers are unfolded, a place where you can leave the shoes, the coat, the baby buggy or the shopping basket, before entering home. However, when the external polycarbonate sheet is folded, it turns into an extension of the inner corridors of the building, which can be used in summer days for dining outdoors or laying on a deck-chair to read. Furthermore, this mixed-use space can also be integrated into the living room of the apartment when folding the interior glass sheet instead. The apartments are aimed to be flexible enough to be easily adapted to the needs and conditions of a wide range of different family models, from single-parent to large families. Facades and other exterior walls have been left completely bare to give support, as a canvas, to the inhabitants’ artistic activities. The concrete and polycarbonate walls and the facade panels could be personalized with graffitis, video, lights, etc. Thereby, the building works as a canvas and art-laboratory for the creation of a new urban cultural identity. 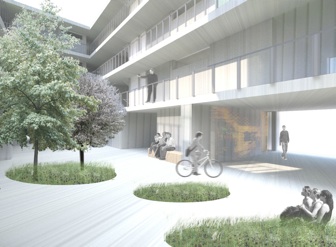 SUSTAINABLE HOUSING
The building has been designed with recycled and easily recyclable materials. The life cycle of a building should consider not only its own lifetime, but also the lifetime of the construction waste generated in the building process. Prefabrication can help in order to minimize them. Thus, for example, the structure of the building is built with prefabricated planar beams and piers of reinforced concrete to make a better use of the material without compromising a cleaner setting up. As well as for the facade panels, the partitions and the joinery. A roof garden has been placed on the second floor to be used as a collective space, but also works as a system of CO2 draining and thermal insulation.
SMART HOUSING
The future inhabitants have a hand in the development of technologies which provide a more efficient redistribution of both energy and cultural resources. If a culture is a social and collective fact, the smart housing should go beyond its internal limits to open over the external urban space. We propose the use of LED lighting on facade for the transmission of visual messages and knowledge in binary code. The activity walls -or small rooms close to the lifts and staircases, wrapped by a polycarbonate skin- can be used as notice boards and rooms for exchanging both ideas and thoughts.
FLEXIBLE HOUSING
As the building program is oriented to provide young artists with apartments for rent, the inner spaces need to be flexible enough to accommodate each kind of family or social circumstances. We think that inner spaces can easily be compartmentalized with sliding partitions. Given that, when the partitions are folded, an apartment can be transformed into a different space, ready for parties, receptions or work. In other words, an apartment requires rooms with flexible room sizes to be adapted according to their inhabitants’ specific needs.
ACCESSIBLE HOUSING
As far as the accessibility is a main goal of the project, the building provides full access for people with disabilities to both collective areas and apartments. Actually, the accessibility can be seen as a consequence and effect of the flexible housing. Since the layout of rooms and apartments is open and adaptable, the whole building should be accessible too.