Our first idea involves the development of a building system flexible enough for dealing with a variable configuration of today’s housing spaces, by means of a modular and prefabricated system. In this situation, a conventional modular system is not flexible enough since it is based on the addition or suppression of fixed elements that can only be modified as a whole. A conventional system only adds complete rooms, not parts of them. The solution comes up when smaller elements than conventional modules are combined between them. Their various sizes make those combinations easier, give more freedom for the project development and provide a better use of the environmental conditions.
Thus, we define two kinds of modules, and one variation for each of them. Module A delimits an enclosed volume of 3,30×3,30×1,20m, externally limited by four identical rectangular elements. Module B is only limited by three of them: the absence of the fourth one makes possible to create a small corridor for joining the modules together. Besides, it can also be used for putting some woodwork like doors or windows. The variations A’ and B’ reduce the depth of the original modules, up to 0,60m, fitting into the idea of the development of a flexible and adaptable project to facilitate future changes. The modules can be placed horizontally or vertically for a better adaptation to the urban fabric, the sloped plots or an irregular geometry. 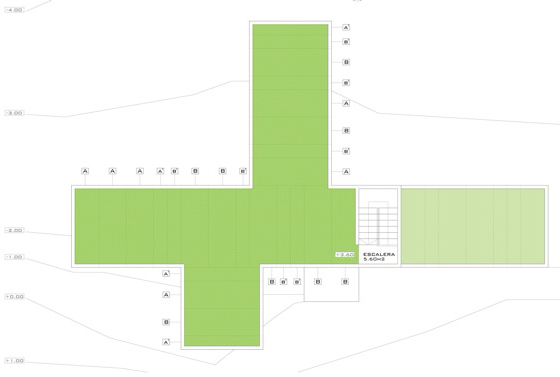 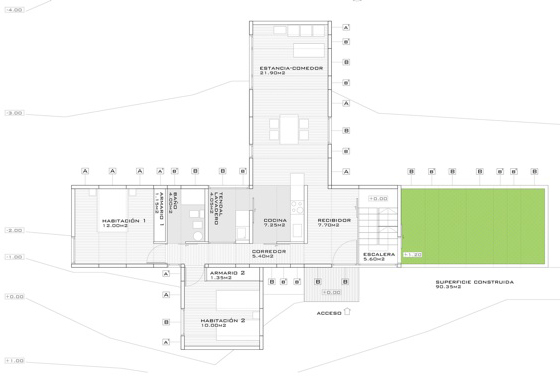 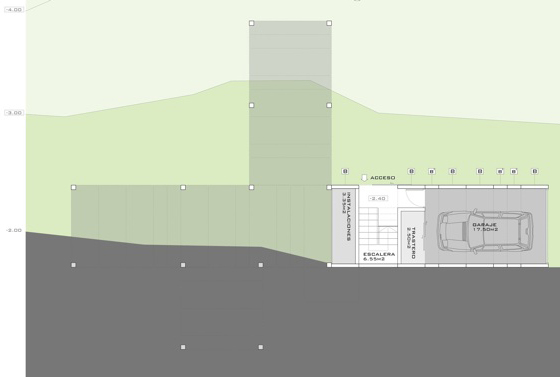 Descriptive report of the project
The project develops an experimental social housing solution for a common family, into an urban fabric of low density. Taking advantage of the local synergies, the building is able to fit into the closer urban landscape, generating crossed views that strengthen the spatial perception of place.
The house has two floors and one green roof. The courtyard, which is accessible from the ground floor, is covered with deciduous plants. The car access, garage, storage room and mechanical room are found on the North side, next to a staircase which serves out all the floors. Inhabited spaces are on the main floor, which is accessible from the staircase as well as from the main access on the East façade, over the sloped plot. The upper floor is an extensive green roof from where you can get some panoramic views of the city around or where you can simply have a rest under the sun.
The house is inserted in the landscape using non-invasive actions, according to the existing urban fabric and taking advantage of the physical, geographical and climatic factors of the environment.