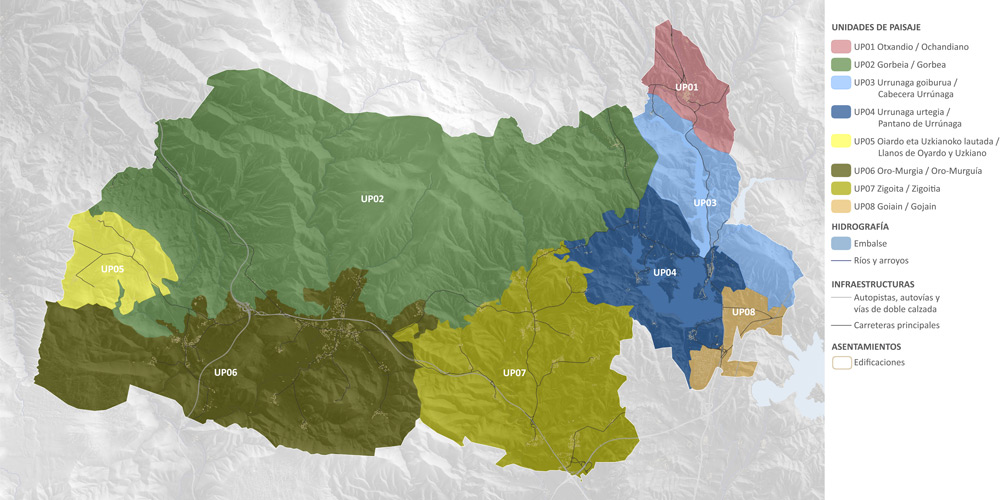 Estribaciones del Gorbea is a territory on northern Alava, limited to the north by the valleys of Biscay and Gipuzkoa, and to the south by the cereal fields of Llanada Alavesa. With a rough topography, it is surrounded by soft mountains and sierras of medium height, filled by valleys covered with forests and pastures, and crossed by the riparian vegetation of Baias, Zubialde and Altube streams. The whole area is dominated by Mount Gorbea, an old mountain rising 1481 meters above sea level and inhabited since prehistoric times. It has given support to traditional land uses, like hill farming or agriculture. Oak and beech woods covering the hillsides highly contrast with the pastures on the summit. Here, the landscape starts to change into the mediterranean character of the southern valleys of Alava, with a stronger presence of mediterranean biota. Even though it is possible to appreciate signs of the predominance of this bioclimatic transition on the small-scale that this area means, it is the human work who has stronger moulded the landscape.
The landscape of Estribaciones is characterized by the forms of the mountains around: Gorbea to the north; Sierra Salvada to the west -from where Nervión river falls in a waterfall of 222m down-; Sierra Gibijo to the southwest -which is more like a plateau because of its flat topography regardless the deep karst modelling-; Badaia-Arkamo-Arrato to the south; and the Urrunaga reservoir, built in the middle 1950s to dam up the Santa Engracia stream, a tributary of the Zadorra river. These forms, deeply reshaped by the human action, are the basis of the social construction of the landscape of Estribaciones through the shepherding, the agriculture, the layout of the towns, the system of paths or the identitary, aesthetic and formal values of the territory.
Therefore, the human activity is as important as the natural environment for defining the landscapes where we live. Human beings, while transforming their territories, are creating new landscapes not valuable only for their qualities or their personal, economic and identitary values, but also for being understood as areas with a strong singular identity different from the nearby landscapes, highly coherent in its contents, structure and functionality. We name these areas as Landscape Units. At Estribaciones, farming and cattle are mixed with small industrial areas and new urban growths which, sometimes, have blurred the original layout of towns.
The different areas and characters we can find at Estribaciones let us delimit eight singular Landscape Units: some areas are full of anthropic spaces, towns and industrial estates; other areas are defined by the pastures, cattle breeding and farming; and water, forests and mountains are the main elements in the rest of the units.
On the left and on the upper plan we can identify these eight Landscape Units: the largest is Gorbea, a natural area of great ecological values appreciated as an identitary element for the local population that composes a scenic background for the eight Landscape Units. 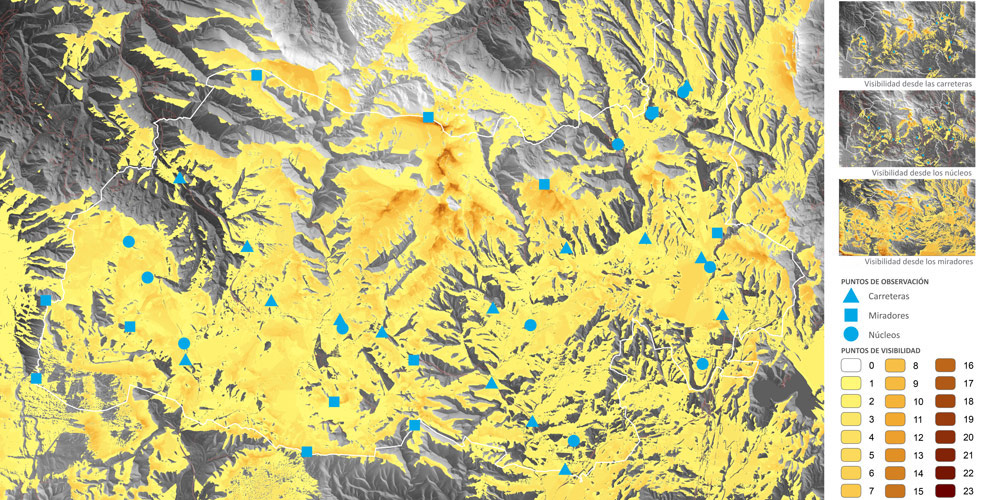 The Landscape Units are thus delimited according to the values and elements found at Estribaciones. One of these values is the landscape visibility, or the visual perception of the landscape from several points of singular visual interest. They are usually put over high places as landscape viewpoints or into settled areas, like town centres or main roads, where people meet. The result is a global map of visibility made by adding up the maps of visibility from roads, settlements and viewpoints.
Even if the most part of the territory has a visibility ratio between 2 and 7, there are even large areas with a lower visibility because of the topography. Thus, the topography becomes a decisive factor in the perception and diversity of the landscapes. As a result of this, the central massif of Mount Gorbea is the most exposed area, the most visible one from the whole territory, with visibility values over 16. That number, in a such complex territory, is very remarkable. Inside the limits of Estribaciones del Gorbea, some other elements are clearly drawn, like the canyons of the Altube, Baias and Zalla rivers, the Murgia diapir, the plains of Oiardo and Uzkiano, and the Ulibarri reservoir. Out of the work area, the agricultural plain of Vitoria-Gasteiz is highly visible from the viewpoints located at the south of Estribaciones, with a ratio over 4 and 5. In this case, the visibility can be read from Vitoria-Gasteiz to the viewpoints and Gorbea as well as in the opposite direction: it is more about the spatial continuity of the landscapes, about their interrelation and their evolution. 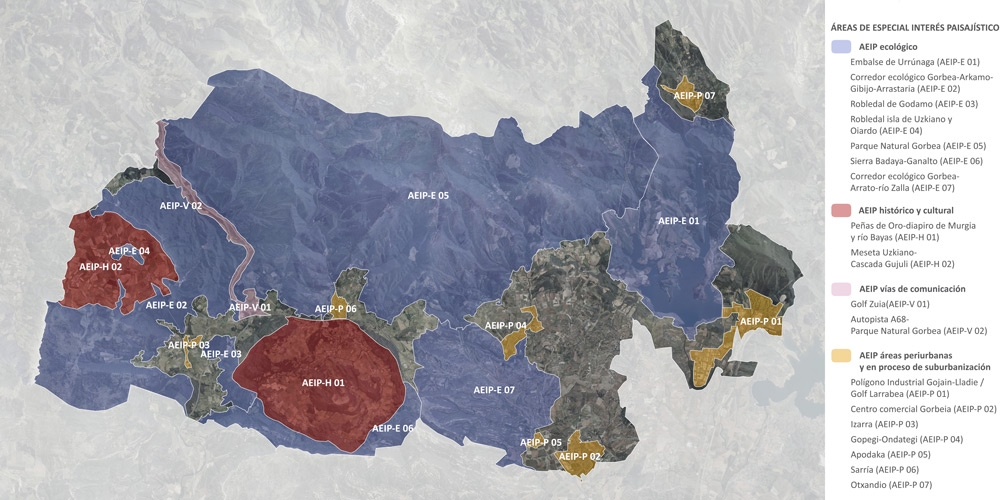 The Singular Interest Landscape Areas (AEIP) are fragments of the territory with a particular heterogeneity or complexity that needs specific guidelines for applying and developing policies and actions for the protection, management and land-use planning of the landscape. Regarding their state of preservation, transformation or deterioration, they are also defined according to their singularity and their ecological, cultural or social values, and characterized for their outstanding aesthetic, perceptive and identitary values. Therefore, they need to be identified through the visits to the site, the photographic interpretation, the study of the dynamics of transformation of the landscape, and the documentary research.
The main objective of the AEIP identification is to guide the landscape guidelines and objectives beyond the territorial planning scale and reach the urban planning scale. Because of that, their limits are not determined by the limits of the Landscape Units, but by heterogeneous areas where the dynamics and values that support their singular interest can be easily understood. Actually, they can be part of various interconnected Landscape Units. According to that, four categories are described: ecological interest (AEIP Ecológico), culture and heritage (AEIP Histórico y cultural), suburban areas and sprawl (AEIP Áreas periurbanas y en proceso de suburbanizacion), road infrastructure (AEIP Vías de comunicación). 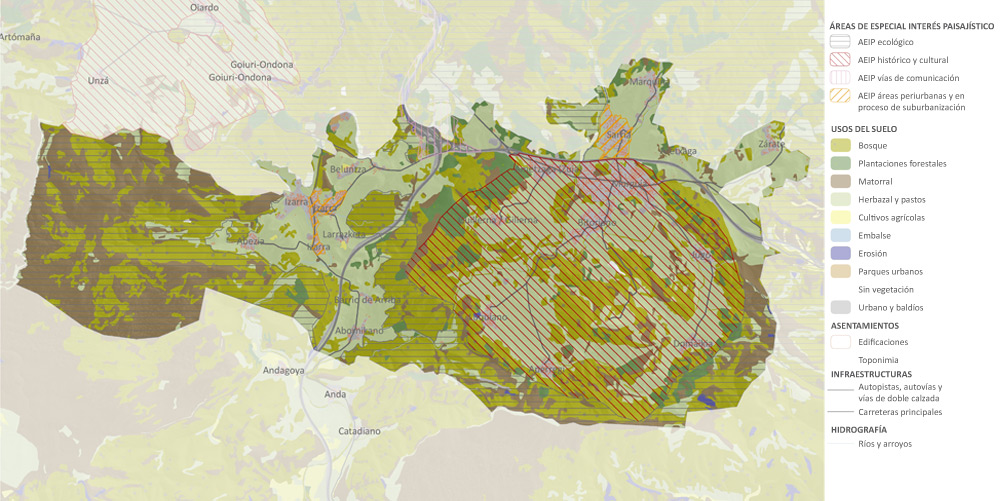 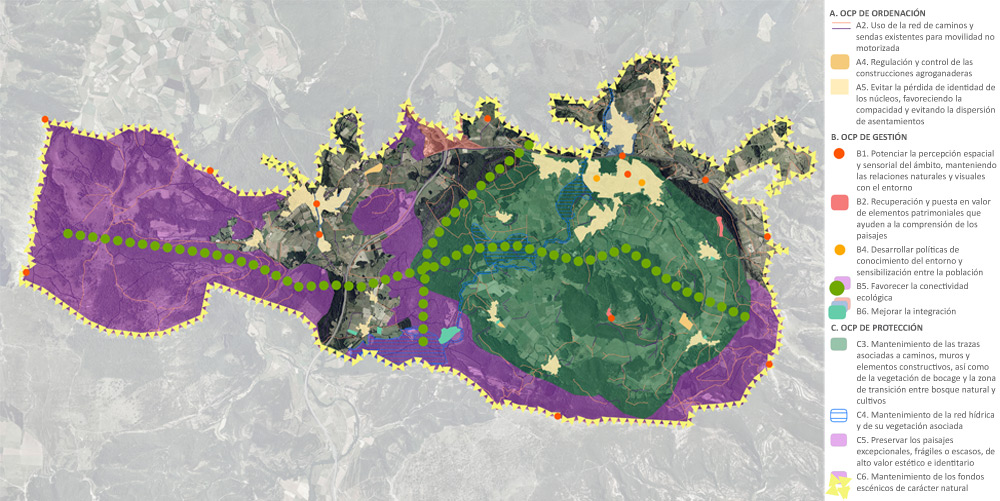 Landscape policies are applied to the Landscape Units and to the Singular Interest Landscape Areas by the implementation of the Landscape Quality Objectives (OCP): they are guidelines for the landscape preservation, management and planning that collect, propose and develop society aspirations for better landscapes. The OCP can be generic and commonly applicable to Estribaciones del Gorbea, or specific to each Landscape Unit or Singular Interest Landscape Area, and it can be referred to the preservation, management or land-use planning of those landscapes as well.