competition for a new sociocultural centre over the old local market ruins, in collaboration with F2 proyectos y obras

On 24 June 2012, a big fire completely destroyed the old market of Reinosa. Built in 1882, the market, which was usually known as la plaza by the citizens, had become a valuable brick-and-iron urban landmark where people used to meet daily, among goods and groceries, to talk about their families, jobs and lifes. However, since 1980 the building had been falling into decline and, despite a failed renovation in 1986, it had not supported any commercial activity at the end of 2000. At that time, the market was housing workshops, rehearsal studios for local music bands and activities for the social integration of people with disabilities.
The aim of our proposal is to recover the traditional old market social character through a new building which provides the neighbourhood with new cultural uses and services the city currently lacks of. The building turns into an open civic space, an accessible open square into the heart of the city, into a new urban environment for cultural and social interaction. What is more, our proposal is oriented to collect the social, cultural, artistic and educational aspirations of the inhabitants, especially of the younger people. 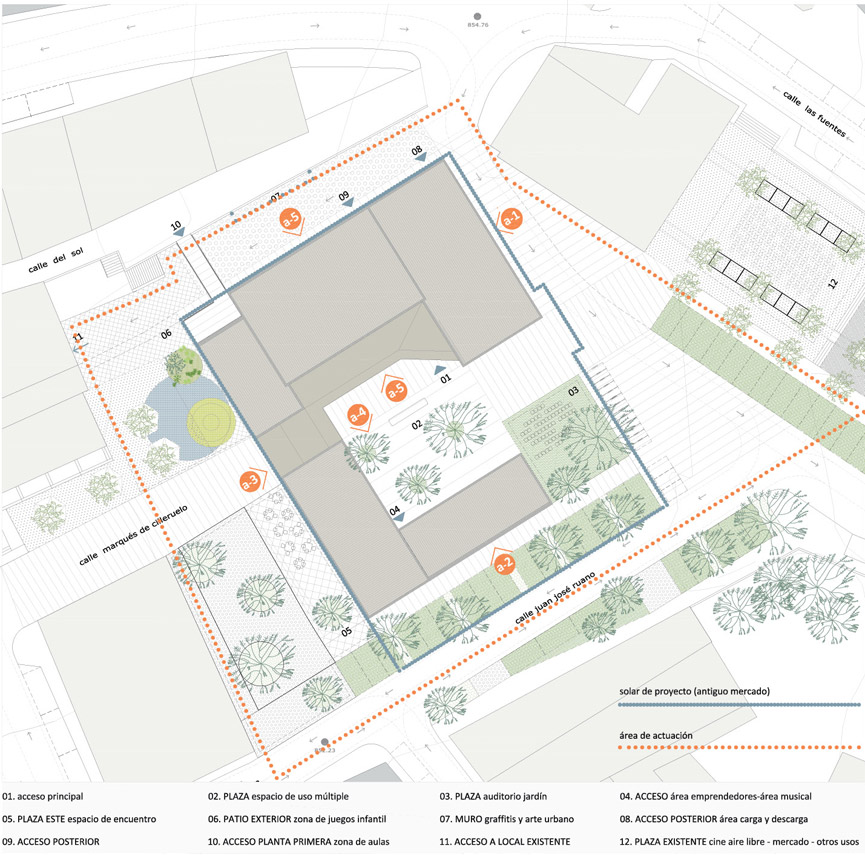 Strategy of integration into the urban fabric
The project continues the traces of the urban fabric for reconnecting the urban gaps located around the old market. Owing to that, the programme of uses is spread out on the site, keeping on with the rhytmn of buildings and facades but giving priority to the streets and squares, which are the core of the project. Therefore, the building can be simultaneously understood as a single architectural element of the urban scenery and as a collection of independent elements working together. Accordingly, the public realm is the key element of the project and enhances the values of the urban landscape of Reinosa as a part of the process of urban regeneration, as an area of social interaction where the artistic works created in the centre can be shown. As a result, we propose these actions:
-the prolongation of Marqués de Cilleruelo street into the new sociocultural centre draws a new pedestrian area to be used as a meeting-point and as a children playground.
-the redesign of Juan José Ruano street along the southern side of the square until heading into Mayor street, makes possible to add the square at the back of the Teatro Principal -Reinosa’s theatre- to the new public market space. There, street markets, meetings or even outdoors performances can be celebrated.
-the stone wall of Sol street, at the north side, is reserved as a canvas for urban street art.
-the main access is situated at Mayor street, between Marqués de Cilleruelo and Juan José Ruano streets, to reconnect the sociocultural centre with the urban scenery and the network of streets. One of those areas is a small garden-auditorium for the musicians to play their songs. There are also cycle parking racks to facilite the urban mobility. 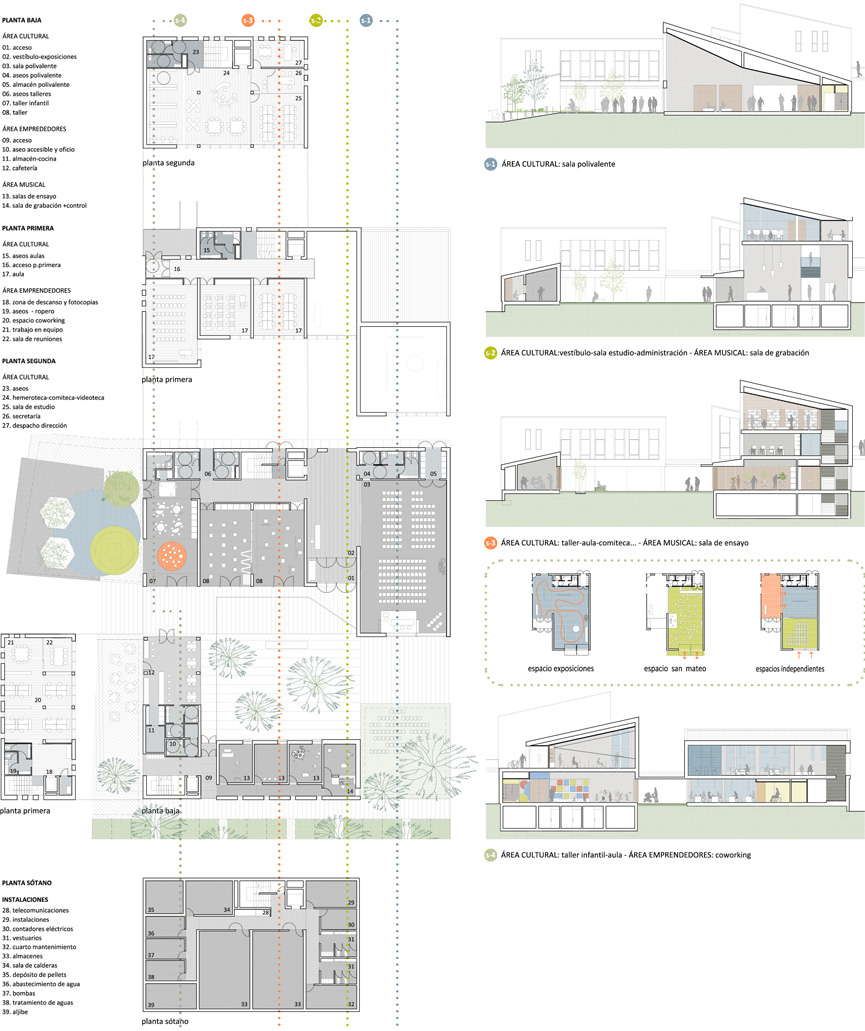 Project and programme of uses
Far more than a key element of the urban fabric, the sociocultural centre is actually expected to be an active element in the citizens’ daily life. Thus, this C shaped building is made up of five blocks and four sectors (cultural area, enterprising area, musical area and basement for facilities and car park) which share the architectural programme. Opened to the east, the building northern blocks are higher to keep the volumetry and size of the nearest constructions. The southern block, instead, is developed only on ground floor. It houses the musical area and contains rehearsal rooms for local music bands which can open to the inner square and thus be transformed into temporary stages for improvising concerts. On the west side of the plot, we find the café looking at both sides of the inner square and the pedestrian area of Marqués de Cilleruelo street, next to the children playground. Above the café, on the first floor, the enterprising area is opened to the east to get the most of the morning sunlight. The north side of the plot houses the cultural area. It is made up of two juxtaposed blocks facing to the south to be properly lit: the first block is composed by two workshops and a children’s room on the ground floor, three classrooms on the first floor, and the library, the study room and a small administrative area on the second floor. This block has its own private access from Sol street to open, if needed, independently from the rest of the centre. The second northern block is the mixed-use hall and the representative element of the centre, as a visual landmark in the square: it is flexible enough to be a meeting area, a music room, a theatre, a cinema or, even, a party zone where youngsters can meet during the local feast of St Matthew.
Sustainability also plays an important role in our proposal, in ecological, economic and social terms. Traditional architectures, particularly when they have been built in rural environments, have usually made a responsible use of the natural resources through ingenious architectural elements which are also part of the culture and the character of a city. As for our proposal, a well-oriented enclosed balcony, which is a typical architectural element of Reinosa, provides the inner rooms of the blocks with generous daily sunlight and heat.
Definitely, the image of the building is quiet and singular. The constructive language uses materials with good performance and durability, where straight lines and mono-pitched roofs -all of them well adapted to the cold climate of the region- are simple forms enriched with facade materials and elements -commonly brickwork painted in white and wooden framed windows with insulated glazing- which bring rhythm, shadows and textures to the building. The public areas are planted with deciduous trees which provide shadows for the summer and let the sun pass through in the winter. These areas are also covered with bushes and aromatic flowers. As a whole, the project offers a strategy of landscape integration in the urban environment without denying the contemporary identity of the new sociocultural centre.