In our cities, the urban fabric usually opposes the natural green areas, as if the urban planning and zoning laws had decided to draw a line which nothing and no one could cross, not even the citizens. In Santander, the urban promenade beside Sardinero’s beaches suddenly ends up at the cliffs of Cabo Menor and Mataleñas: here, both the natural and urban values disappear when the public realm becomes the back of a car park.
On top of the cliffs, the coastal path of Mataleñas covers the northern and eastern coast of the city up to the lighthouse of Cabo Mayor. This path starts at the foot of a long and narrow staircase, hidden behind a sea-facing block of apartments and hotels. The staircase provides a simple solution for the almost thirteen metres drop from the path to the promenade. Unfortunately, this solution is not suitable for the elderly and the children, not even for the tourists who usually do not know this access.

Site
1- project site
2- coastal path
3- cliffs
4- park of Mataleñas
5- promenade
6- Sardinero’s 2nd beach
7- Cantabrian Sea
Our proposal is aimed at integrating a new access to the promenade with the landscape values of Santander’s northern coast: the rough, fractured and vertical shapes of this area have traditionally inspired artists and have become an identity landmark of the city. Therefore, we propose a new public space open to the sea at the foot of the cliffs, where the promenade heads off and from where disable people, elderly and children could gain access to the coastal path through a new panoramic lift. These are our four guidelines:
– The new access should be placed at the foot of the cliffs, where the promenade ends. This area has always been a meeting point for the citizens: a popular urban area beside Sardinero’s beaches where the scenery of the northern coast and the Palacio de la Magdalena -the old royal palace- remains as one of the most iconic Santander’s landmarks. Mataleñas’ coastline has a valuable craggy outline built by the force of waves and tides, so every urban operation here needs to be unobtrusive and calm, without distorting neither the natural values nor the landscape.

– This new area at the foot of Mataleñas should be public, for community-use, open and part of both the urban fabric and the coastline. Thus, the existing car park leaves room for a new small square looking to the sea but protected from the traffic, from where people can be given access to the coastal path. We define the new square as a meeting point for the citizens and the tourists: a place to play, relax, enjoy the views over the Cantabrian Sea and learn about the path and the northern coast of Santander. Therefore, the square incorporates green areas, playgrounds, benches and a little café next to the path access. The pre-existing statue dedicated to the pre-Roman Cantabrian warrior is moved from its current situation at the car park to a prominent position on the promenade.

– Disable people should be able to enjoy this place too. The square and the path can be accessible to all citizens, regardless their age or physical condition. Since there is about thirteen metres drop from the square to the path, a lift in a glass box is the only possible solution which does not require big earth movements or the irremediable transformation of the natural and landscape values of the coastline. Moreover, the glass box fades away the infrastructure in the cliffs and opens new panoramic views over this suggestive natural environment.
– Our proposal must not affect the longshore drift, and must be compatible with the coastal floods. In winter, this area may be flooded periodically by both storm events at the sea and high tides. Consequently, if a wide area of the car park surface is replaced by a rougher permeable pavement of cobblestones and green areas we get a new surface whose higher friction will slow down the waves and the surface runoff. Some small bushes, plants, flowers and evergreen oaks are planted on an artificial dune of topsoil which also will help to contain the waves. The dune has another technical justification: it provides enough soil to grow trees and plants with long roots in a reclaimed land which still has not large enough layers of structured soils. In terms of sustainability, our proposal is designed to use common materials with a low cost of maintenance which can be easily substituted if needed. 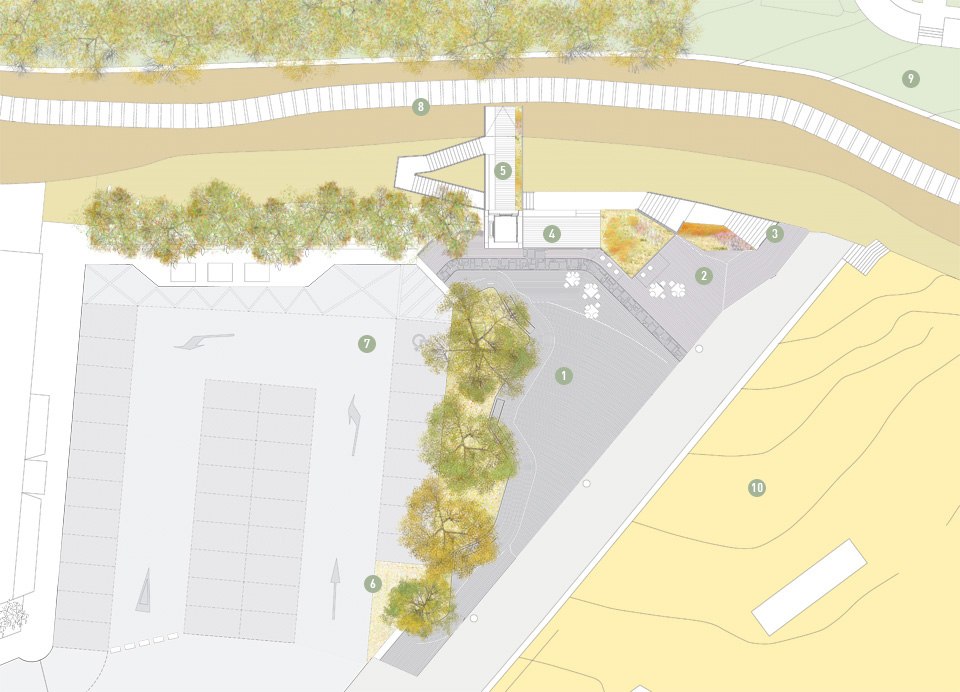