open ideas competition for a mixed-use building and cultural centre 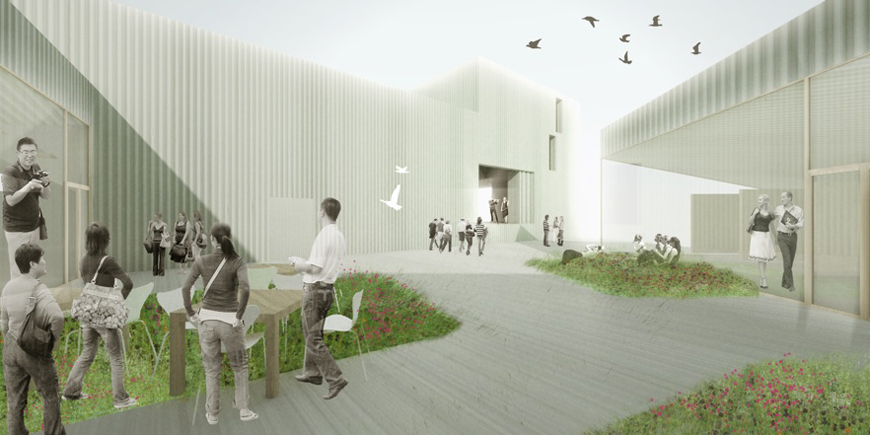 The competition for a Multifunctional Community Centre in Cabezón de Pisuerga is developed on an irregular-shaped plot, near to the Town Hall and Nuestra Señora de la Asunción church. Public spaces around those buildings have strong institutional, social and religious characters and have become hubs for the inhabitants’ daily activities while facilitating social interaction.
We propose for the Multifunctional Community Centre a similar strategy of plot occupation: the building program is developed on a new public square that facilitates the social interaction among the inhabitants through outdoors activities related to the cultural character of the Centre, such as theatre, music concerts, exhibitions, etc. The development of outdoor activities makes easier the scope of knowledge and culture over the society, and enriches the daily experience of the citizens.
Thus, the program is adapted to the plot boundary through the definition of a public square inside it, protected from the city around, from where every use of the building can be accessible: theatre, classrooms, administration and café. The layout of these spaces, arranged around the square, helps to introduce sunlight inside them through the glass skin that wraps the building internally. Outdoors, the skin is opaque, with tiny holes on the walls and a low headroom. Since the building is almost completely developed on the ground floor, both the external opaque facade and its cross section remind us of the volumetry of the traditional housing in Cabezón -up to 7.00m high-, so that the building fits typologically into the urban fabric. As opposed to this, the piece that wraps the theatre has a different interpretation because of its singular character, which is intended to be closer to other singular buildings in Cabezón, such as Nuestra Señora de la Asunción church: as a reinterpretation of a church, the theatre is characterized by the simplicity of its shape and actually only wrapped by an opaque facade with few openings. It is also up to 10.50m high to include all of the technical elements required by the program of theatre -the stage machinery, the air conditioning system, double-height room-. Moreover, the height gives it a singular identity on the square and in the urban fabric, as well as it happens with the church.
The Centre is proposed to be developed in several stages for a sustainable building progress. Although the competition brief required its completion in only two stages, the flexibility of the project lets build it even in three. The first one, theatre, is completely functional by itself while the two others -classrooms and gallery- are subordinated to the first one. The first stage comprises the rooms and areas linked to the theatre -with the only exception of the music classrooms-, the public restroom, the café and the square next to the theatre. The second stage -classrooms- develops all the rooms -except for the painting and sculpture class-, the administration offices and the rest of the public square, including the green areas. The third stage comprises the gallery and the painting and sculpture class.
The program is made of two continuous volumes: one tall, a theatre that marks its place on the square and into the urban fabric, and other low, that embraces the inner square. The flexibility of uses is achieved by the combination of several different spaces in the building. In the theatre, the seats of the stalls can be cleared up and stored under the stage to transform it into a mixed-use space. The stage can be opened on two of its three outer walls, so it could be divided into three smaller separate stages for simultaneous spectacles, as well as they can be used together for new models of scenography. The classrooms are, instead, delimited by sliding partitions to join them in a bigger classroom, a workshop or a conference hall.
On the square, the flexibility is part of the multifunctional character of that space. It can house concerts, exhibitions, meetings, public activities or it can simply be a meeting-point and a rest area for the citizens of Cabezón.
01 theatre
01a seating
01b stage
01c dressing and changing rooms
01d tailor’s
01e store
01f light and sound equipment room
01g projection room
01h box office and wardrobe
01i hall
01j music classroom-rehearsal room
01k music classroom
01l toilets
01m stairs and corridors
02 gallery
02b painting and sculpture classroom
02c mixed-use classroom
02d lecture room
03 café
04 offices
05 shared areas
05a public toilets
05b corridors
05c technical rooms
05d general store 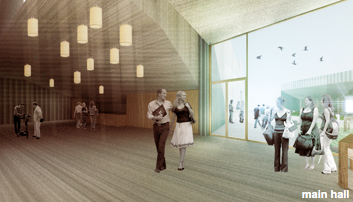